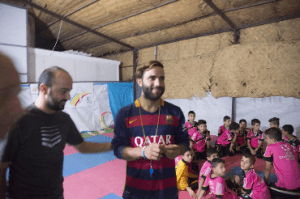 One day our friend from Etuti Institute, Ninos Haddad (standing left), took Quint and me to see a group of boys, about ages 6-14, who were training in martial arts at the Ashti IDP (Internally Displaced Persons) camp. The coach, Allin, (standing right) also a resident of an IDP camp, was an extraordinary instructor, and beloved by the boys.

Allin told us that before this Etuti-funded martial arts program began, all these boys were spending their days sitting inside their caravans, mostly idle with nothing to do. Or they were wandering off into Erbil, at loose ends and up to no good.

When he first offered the program to the boys in the camp, perhaps 3 or 4 showed up. As word spread, though, about how challenging—and fun—it was, before he knew it he had 25 eager, committed martial artists.

It is obvious from even one minute’s observation of students and teacher just how much they care about each other. The students clearly respected each other and were friends as well. There was a deep learning process in place that went way past martial arts: love, respect, hard work, teamwork, support your teammates, discipline, and, as my dad once said, a “do what you love and love what you do” attitude. BEAUTIFUL.

Watching these focused, dedicated kids, close-knit group of athletes, some as young as 6 years old, display such unity, not to mention uncanny skill and discipline, was incredibly inspiring.

It just so happened that the next day the boys had been invited to perform a public display of their skills. It was an impressive spectacle—the young camp athletes from the night before were transformed into a poised, cohesive group, perfectly choreographed. They were as much precision dancers as powerful martial artists!

Stand with Iraqi Christians is a church-based 501(c)(3) non-profit organization under The Episcopal Church IRS exemption.